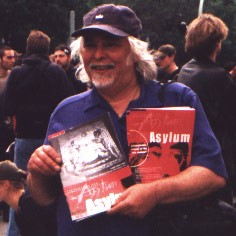 Terence McLaughlin died on 3 September 2007. He was very recently diagnosed with advanced lung cancer, and caught a secondary infection over the weekend before.
Terence was born in 1947, and was a militant revolutionary socialist for many years in industry before undertaking a psychology degree, which he completed at Manchester Polytechnic. His PhD ‘Psychology and mental health politics: A critical history of the Hearing Voices Movement’ at Manchester Metropolitan University was examined by Marius Romme in 2000.
During the period of his studies and then afterwards he brought radical perspectives to campaigns, conferences and publications against the power of experts to define what is normal and abnormal for others.
He was a Co-founder of the National Paranoia Network & until his death, executive editor of Asylum magazine.